What the hot heck is this?

Super Art Fight is the greatest live art competition in the known universe, a live-action performance where two or more artists battle against each other on a giant canvas. With the help of two quipping hosts and the Wheel of Death, they compete for the audience’s affection in order to score the win. Yes, the winner of an Art Fight bout is determined by the fans, and the fans alone, as we use Science (known in some circles as a decibel reader) to determine how loud the crowd cheers and crown the winner. We pit cutting-edge artists against each other in the art of creative combat, reacting to whims of the fans.

In February 2008, on the stage of Katsucon, Jamie Noguchi and Nick DiFabbio made something special. Little did they know that 15 years on, their moment of inspiration would lead… 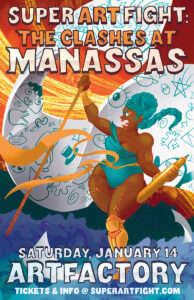 SAF Army, get ready! It’s time to roll-in, show up and show out for a brand-new location in a brand-new city! On Saturday, January 14th, 2023, Super Art Fight is… 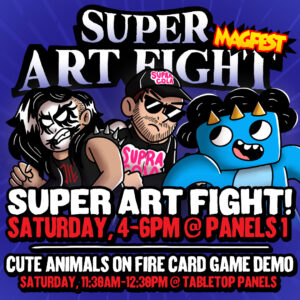 The SAF Locker Room is positively beaming with excitement as we get ready to kick off our 2023 Season, our FIFTEENTH ANNIVERSARY season, and it kicks off next weekend where… 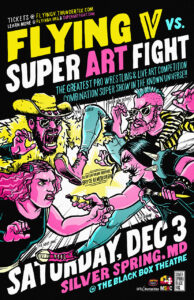 The unthinkable is thinkable. What they said couldn’t be done, will happen. Saturday Night, December 3rd, 2022, Maryland and DC’s home of live action comic book pro wrestling collides with…